The week of April 8–April 14 TUD will be donating 5% of all sales to Gary Sinise Foundation.

COVID-19 Update: Some orders may experience delays. Thank you for your patience! 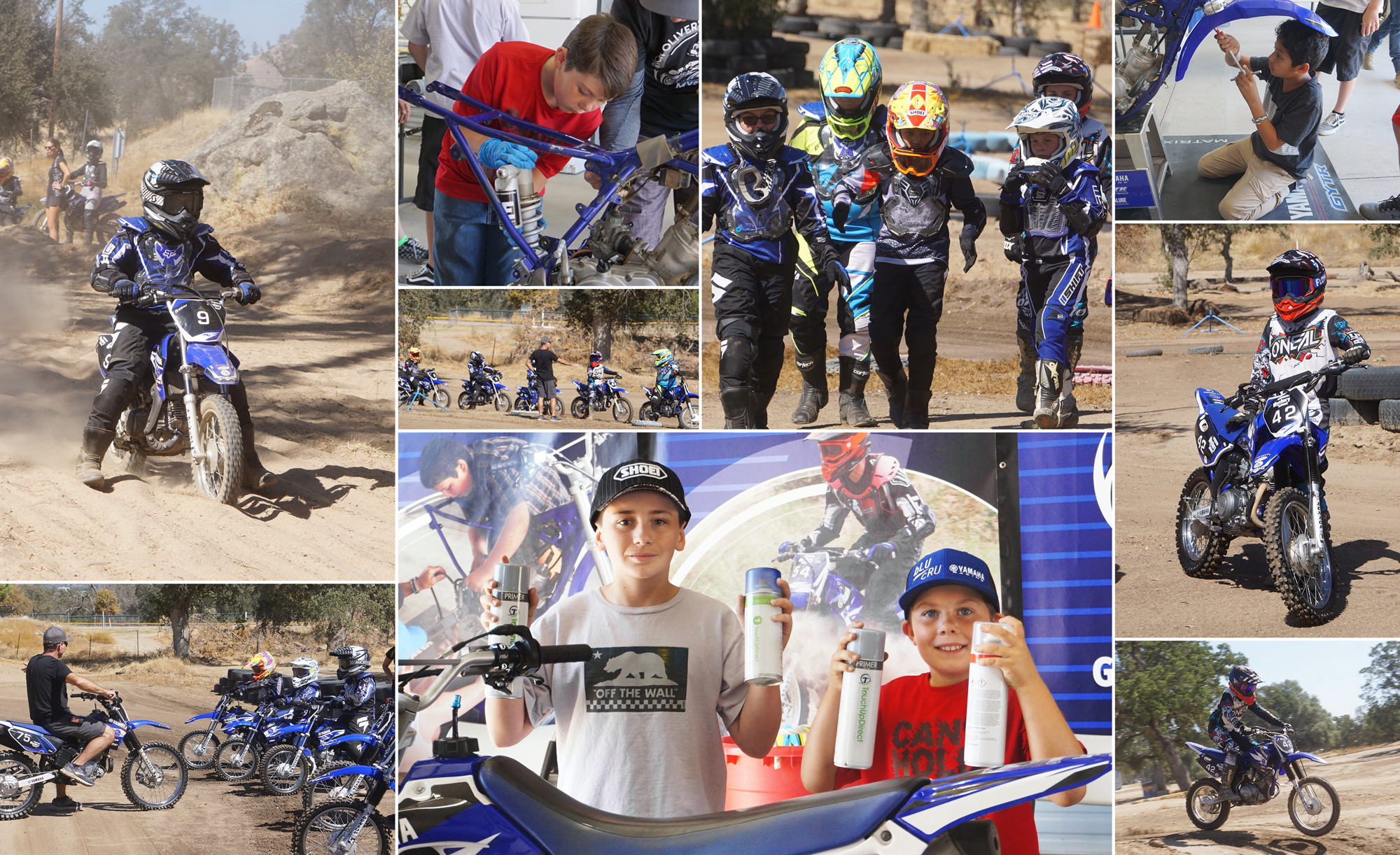 It wasn't easy to pick two kids for TouchUpDirect's scholarship to Rich Oliver's Mystery School, there were so many wonderful applicants and we think that all kids deserve the chance to experience a weekend learning to ride and take care of their bikes in the foothills of the Sierra Mountain Range. But after reading all of the applicants' letters, we decided that we wanted to celebrate our place as 1230 on Inc.'s Annual List of the 5000 fastest growing American companies in America, by gifting scholarships to Marshall and Caden.

Described by his parents as an incredibly kind kid, Marshall got a dirt bike as a gift and said not only would he love to learn to ride it better, but he wanted to "learn how to take care of it so I can give it to another kid, when I outgrow it." And Caden's parents shared that they decided to put aside their worries about dirt bike riding and give their wonderful son the bike he'd always wanted. Late to start, Marshall wrote, "If I got good I could come back and help teach other kids like me someday."

These two amazing kids embody the very qualities that we celebrate here at TouchUpDirect; an interest in problem solving and learning new things, thoughtfulness and consideration, and a desire to do the right thing and have fun while doing it! Having the chance to attend Rich Oliver's Mystery school gave them the opportunity to exercise these qualities through work and play, developing not only their skills, but their confidence as well. We've no doubt that the experiences that they shared that weekend will stay with them, and inspire them, for a long time to come.

In our ongoing series of featuring inspiring individuals and organizations, today we're shining a light on motorcycle road racer Danielle Diaz. TouchUpDirect has been a proud sponsor of Danielle's since 2014, after meeting her at another TUD Journey Inspiration, Rich Oliver and his Mystery School. Back then we knew that Danielle was more than just a phenomenal road racer, she was a phenomenal person. Whether it's teaching kids how to ride, or working with veterans, Danielle has always been interested in helping others. Read our interview to learn more about the road she's traveled, and where she's headed next on her journey.

1. Where were you born? How did growing up there shape you to who you are today?

I was born in Fresno, CA and grew up on the outskirts of a small town, Caruthers, CA. Growing up out in the country allowed me to spend a lot of time being active and playing outside. It also taught me to be comfortable rolling around in the dirt and to not be afraid of getting some scrapes, bumps and bruises along the way. I spent a lot of time with two cousins and my brother growing up and was the only girl in the group. We were always competing with each other in some way and there was no way they'd ever go easy on me or miss a chance to make fun of me (nor would my uncles) which taught me to hold my own.

2. What is something you've always been passionate about?

I have been passionate about racing and riding motorcycles since I started when I was nine. I have also been passionate about pursuing a profession which would allow me to interact with and help others since I was about eight. My mom had been involved in a car accident which required her to go through physical therapy. Her experience sparked my interest in health care and for years now I have desired to eventually merge those two passions.

3. What is an item that you are proud of owning?

Probably not the most exciting answer, but I am proud to own my 2018 Subaru Crosstrek. His name is Gunner... Gunner the Stunner... and he has probably been my most "big girl" purchase yet.

4. What is an obstacle that you're proud you overcame?

I suppose I would have to say graduate school since it seems like the appropriate thing to say here. I am a competitive soul, especially against myself, which means I am always aiming for more. However, graduate school was quite the obstacle in more ways than I had anticipated it would be and I am happy to have completed it and finished with honors. I am also proud to have been able to serve America's veterans as a chiropractic intern at the Central Iowa VA during my last five months of graduate school. Not that this was an obstacle, but an experience which challenged and shaped me and my career.

5. What type of motorcycle racing do you do?

I road race. When I do compete, I typically compete in MotoAmerica races located mostly around the West Coast.

6. What is your day job How/when did you start racing?

I work as a chiropractor in San Jose, CA at Premiere Spine & Sport. I am also currently volunteering some of my time as a sideline doctor for the men's San Francisco Revolver Ultimate team.

I began riding dirt bikes when I was about nine years old in 2002 and the idea was to ride around the house since we lived on 50 acres. One of my dad's coworkers at the time raced flat track and so did his son and they had invited us to go try it out. We drove to Chowchilla and I ended up finishing 2nd during my first race on a PW80 against two-stroke 80's and 85's. After that we began racing almost every weekend and finished out the year with a championship. That championship won me tickets to go watch the Sacramento mile and I was able to see what real flat tracking was for the first time. I left telling my dad that was what I wanted to do someday. I worked my way up to racing 450's in the local expert and pro-am classes throughout the years and eventually began road racing in 2010.

7. How did TUD start sponsoring you?

I met Uri (CEO, TouchUpDirect) a few years back when I was coaching at Rich Oliver's Mystery School. They had attended the training camp and after spending some time together and talking about racing, things sort of went from there and transitioned into a friendship and sponsorship.

8. What is the ultimate race?

My old mechanic and I, Derek Keyes, used to tease a lot that some day we would like to do the Isle of Man. It is known for being a rather dangerous race but we always said we'd just go out there and take it somewhat easy so we could at least have the experience. Not sure either one of us know how to take it easy however. I doubt we'd ever end up doing it, but that is one of those enchanting ideas that probably most motorcycle racers think about at some point.

High Praise and Paying it Forward

We came in at 1230! That's according to Inc.'s Annual List of the 5000 fastest growing American companies. And to celebrate we're going to donate $1230. dollars to sponsor two kids for the weekend long Ride & Wrench program at Rich Oliver's Mystery School, an amazing company right here in California.

Mystery School shares our own CEO Uri Thatcher's passion for motorcycles, and our philosophy of embracing pride of ownership; if it's broken, you don't toss it, you fix it. Located in the foothills of the Sierra Mountain range, on 13.9 acres of specifically designed flat tracks and dirt drill areas, the school is run by retired American Motorcycle Association and professional road racing champion Rich Oliver. Ride & Wrench opens kids up to a whole new world; it teaches them how to ride safely, and how to take care of a Yamaha TT-R dirt bike. It gets them off the screen and outside, engaged in a sport they can spend their lives enjoying.

On day 1 kids ages 8-18 learn to ride on an expertly designed 13 acre off-road facility, helping them gain skills, confidence and control. And at the end of the day, they learn how to clean and lubricate their bikes. On Day 2 kids get the unique hands on experience of actually assembling a bike that Rich himself will take for a test ride. Getting down and dirty and working with their hands introduces kids to a trade, empowering them and rewarding them for their efforts. It also helps them to appreciate their possessions and shows the value of taking care of them, and at the end of the weekend, each person goes home with their very own wrench kit.

It's an amazing experience from an incredible team that is dedicated to helping kids gain skills, confidence, and control. And we're proud to be a part of it.